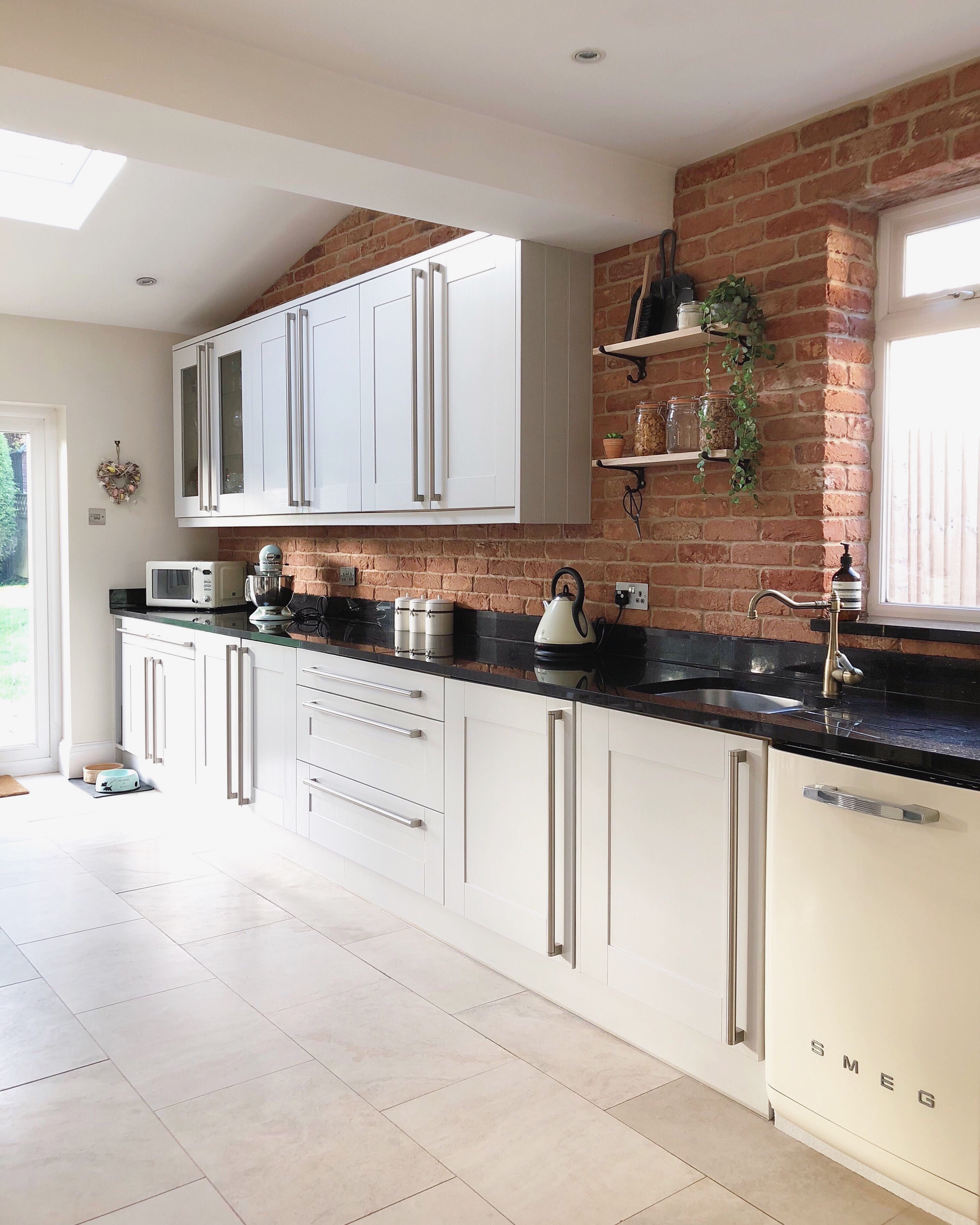 We didn’t wait too long after finishing the painting of the kitchen cupboards, to make a start on the second stage of our kitchen renovation…the exposed brick wall!

We knew from the beginning that we wanted this whole wall to be exposed brick, and chose a light colour paint for the units so they complimented the brick colour as well as the black granite worktops. It would have been near impossible to reveal the original brick behind the plaster already on the walls, so we decided to use brick slips.

I had seen brick slips before in restaurants and different interior designs, and was fascinated at how realistic they look once up and fully pointed, so we knew this was the only option for us.

After roughly calculating the square meter size of the wall we would be bricking (and then adding an extra few for luck) we were ready to choose the actual colour of the bricks we wanted to use. 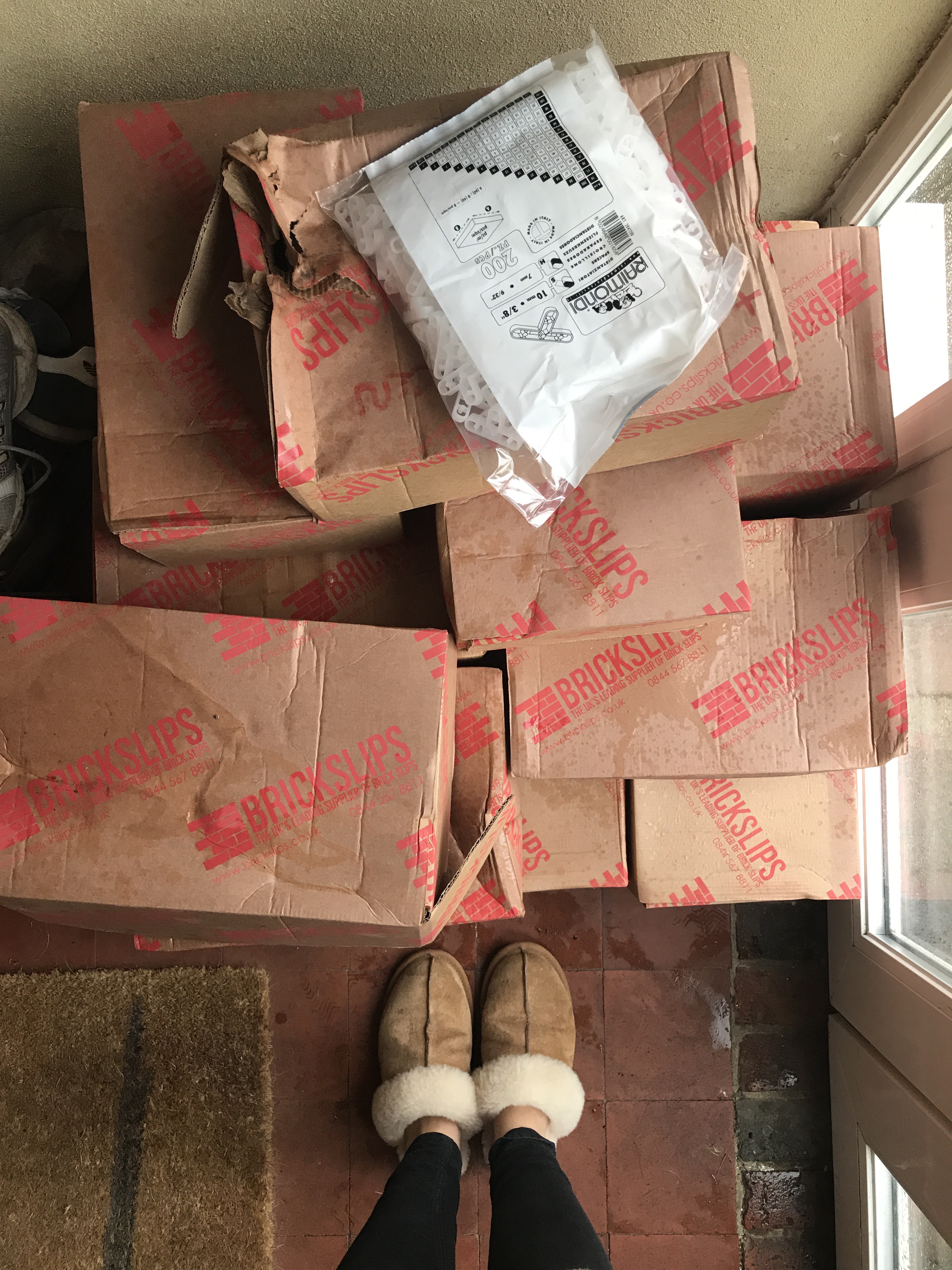 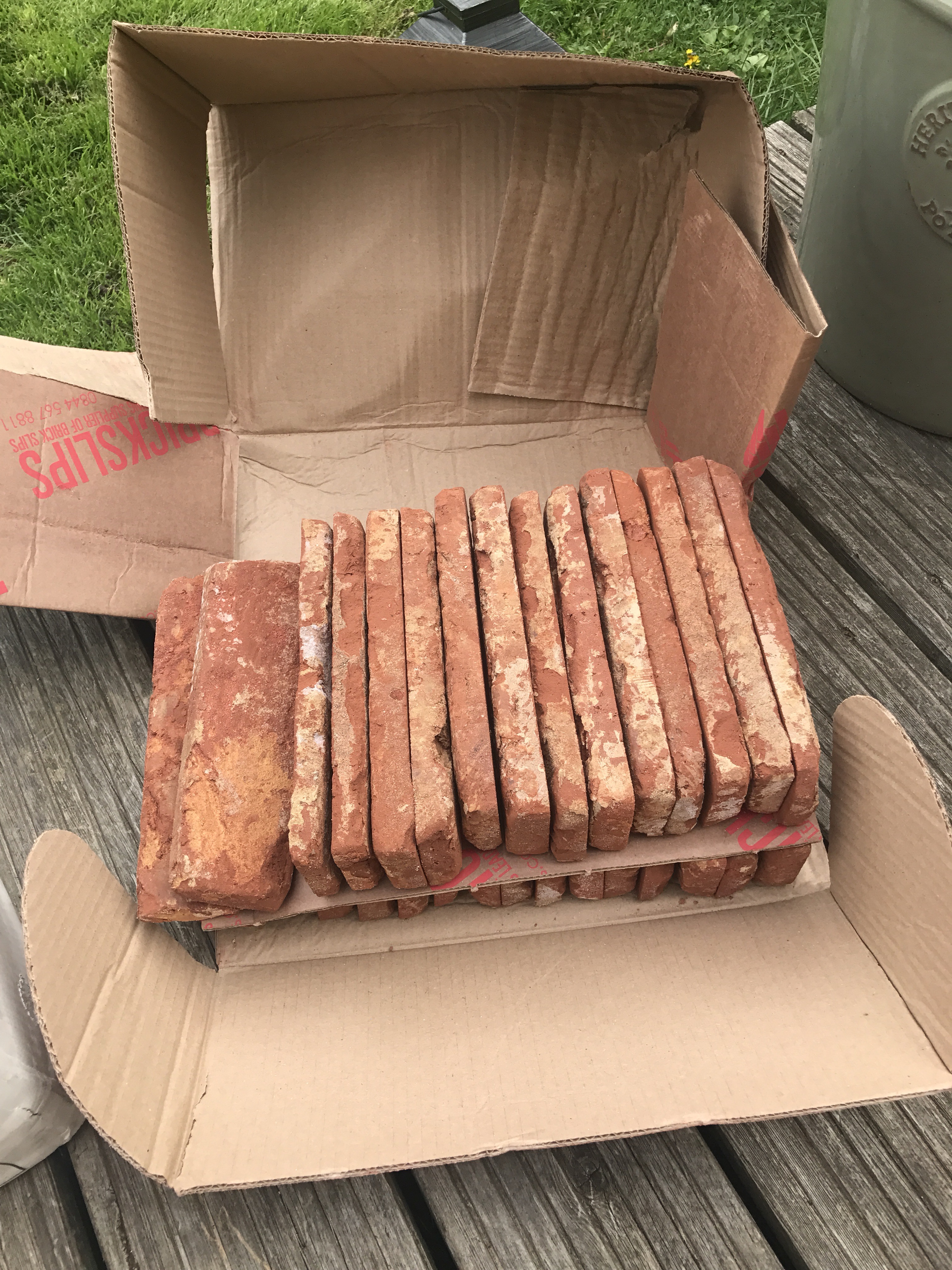 We decided to use www.brickslips.co.uk as the leading supplier of brick slips for both commercial and residential use, and they were so incredibly helpful (I phoned them a good few times!). We decided on a red brick mix so that it felt in keeping with the rest of our house, but also quite a rustic finish to the brick itself as we loved the idea of a rustic brick against a slick modern kitchen unit and surface. The chosen mix was the Olde Bayswater Blend, and it was absolutely perfect. 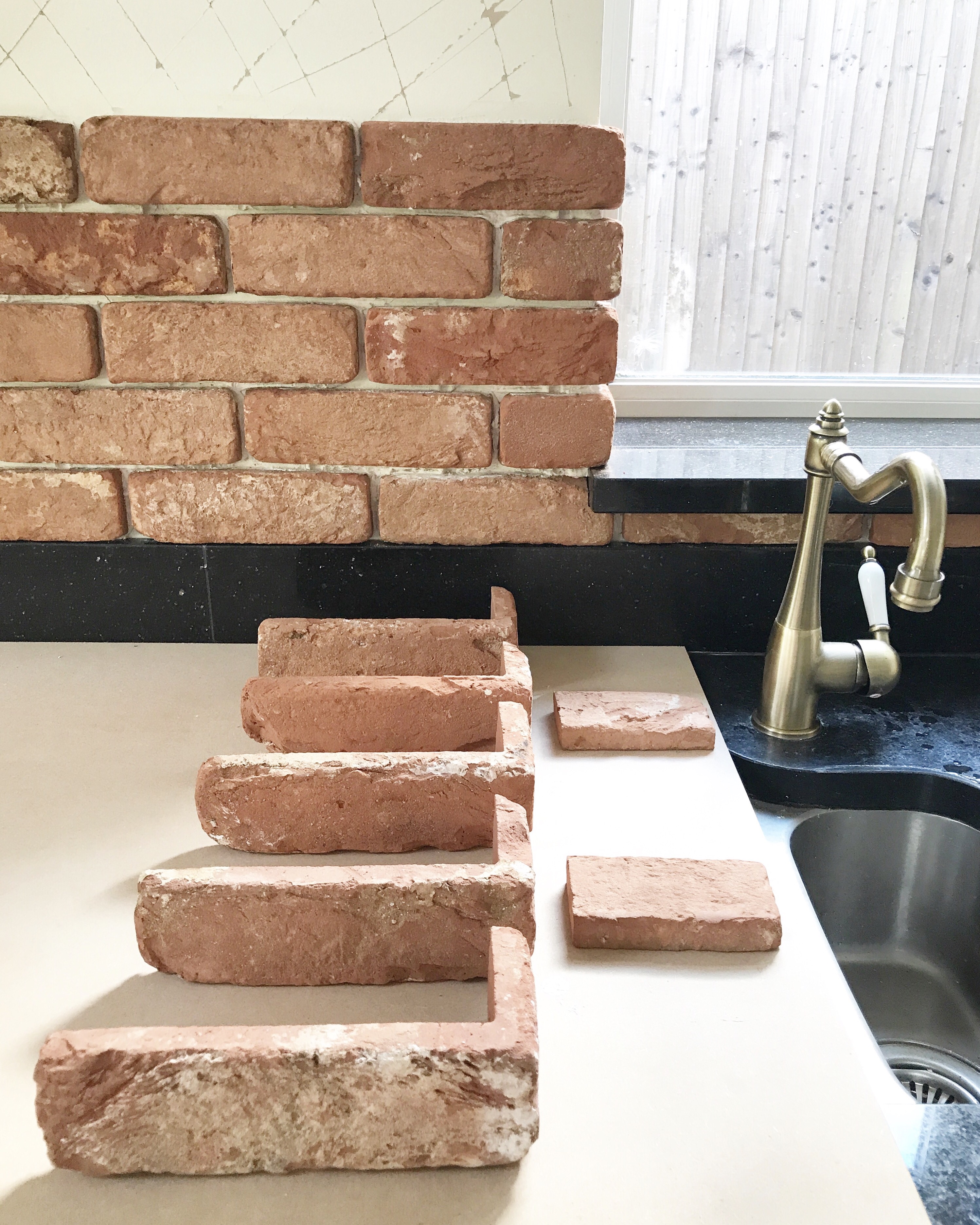 We also have a medium sized window on our kitchen wall, that would be included in the brick wall, with a lot of corners and edges that I was initially really worried about. However, brickslips.co.uk also have specially made ‘corners’ and ‘reveals’ made for exactly for what we needed! (I ordered a few more of these than we needed just in case I broke any!)

The corners were perfect for the sides of the window, and the reveals we decided we would use along the top of the window for consistency of the line of the bricks. 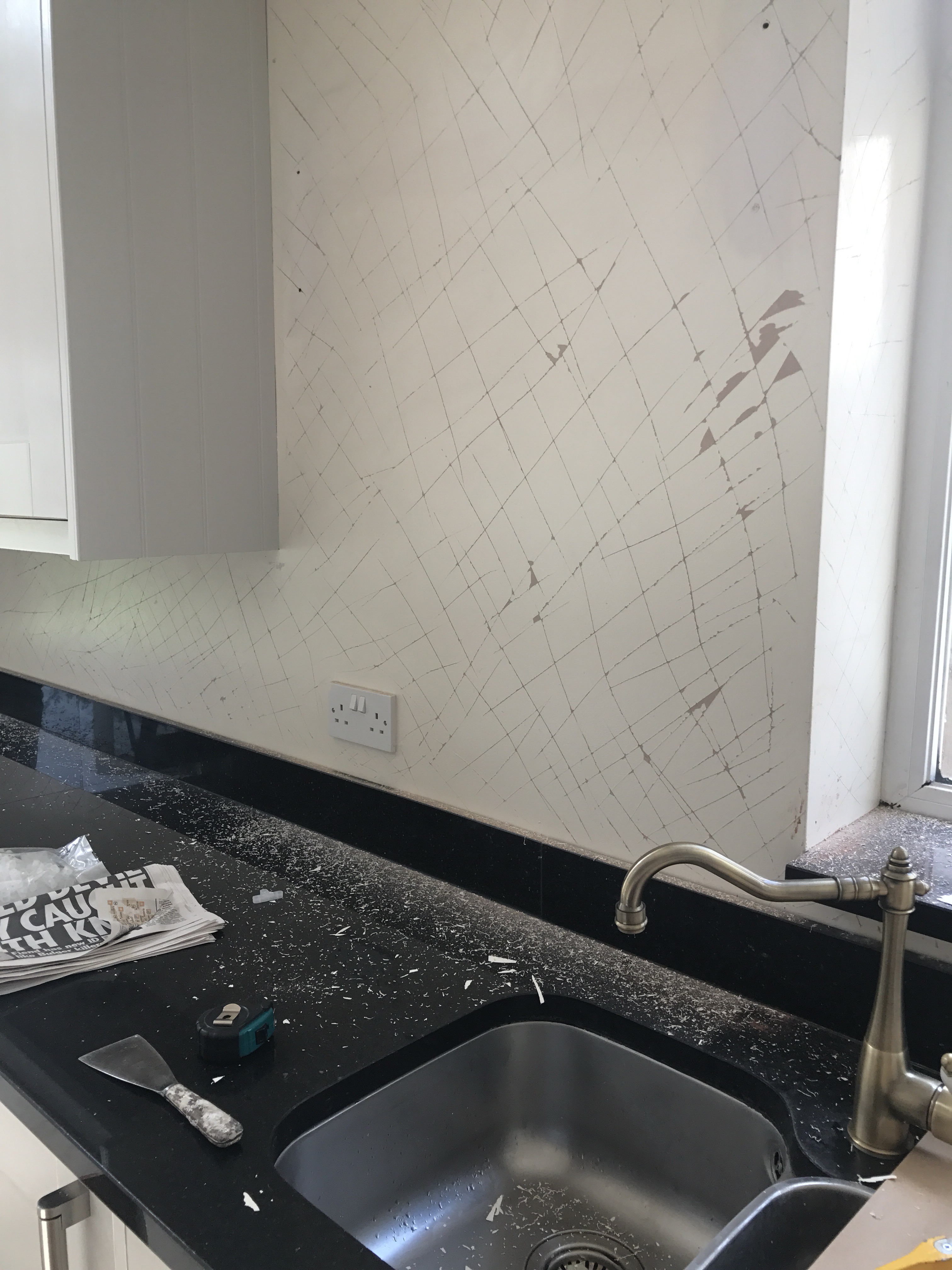 You may think we are crazy, but we want to try and do all (or as much as we can) of our renovations ourselves so that we can learn some new skills and truly understand what goes into each stage. The wall was no exception, and every single stage we completed ourselves, starting with scoring the whole wall all over, to make sure we had a rough surface for additional grip underneath the adhesive. After scoring we rubbed it all down to remove the debris using some light sandpaper, and ran a damp cloth over and left it to completely dry out. 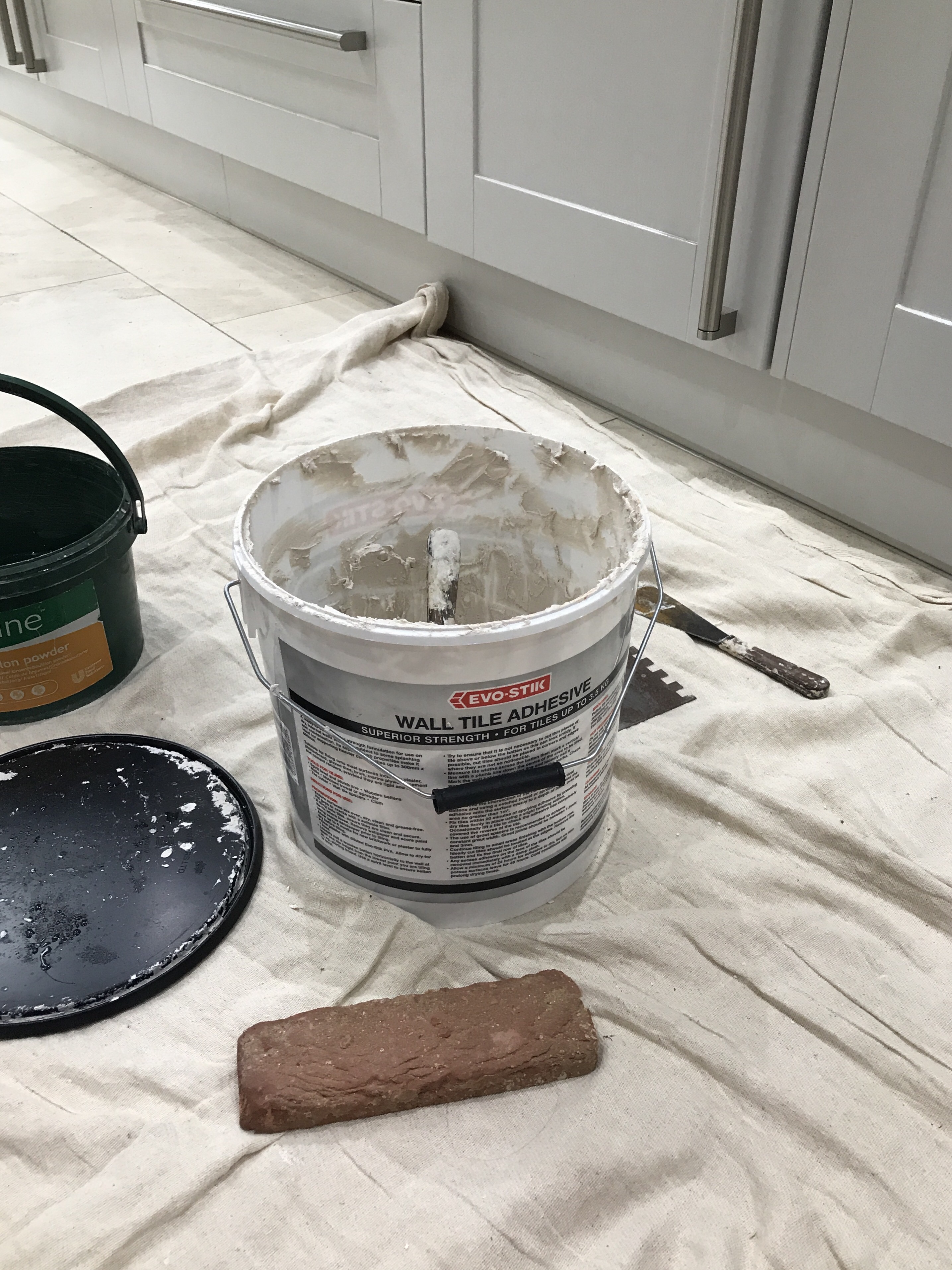 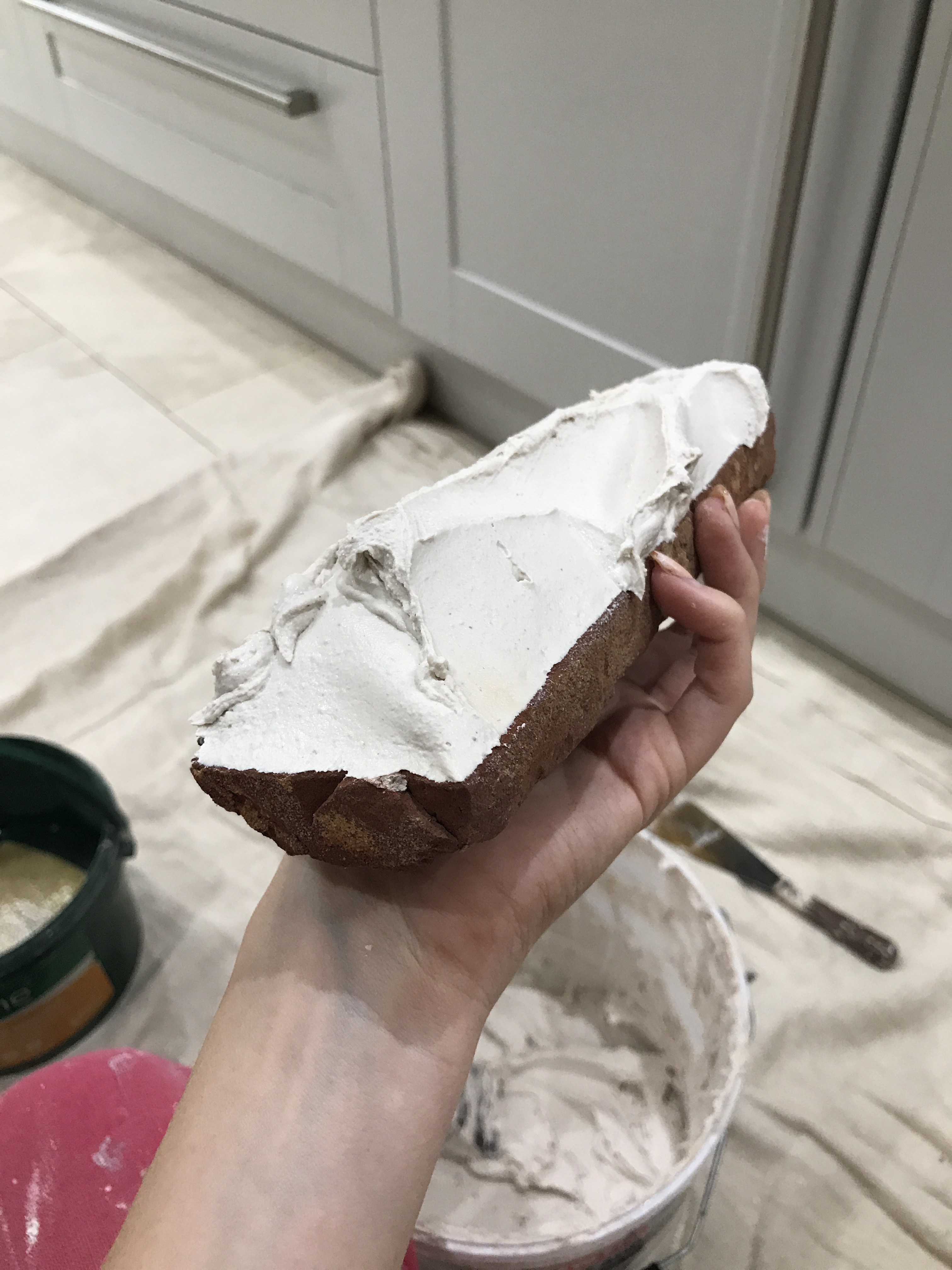 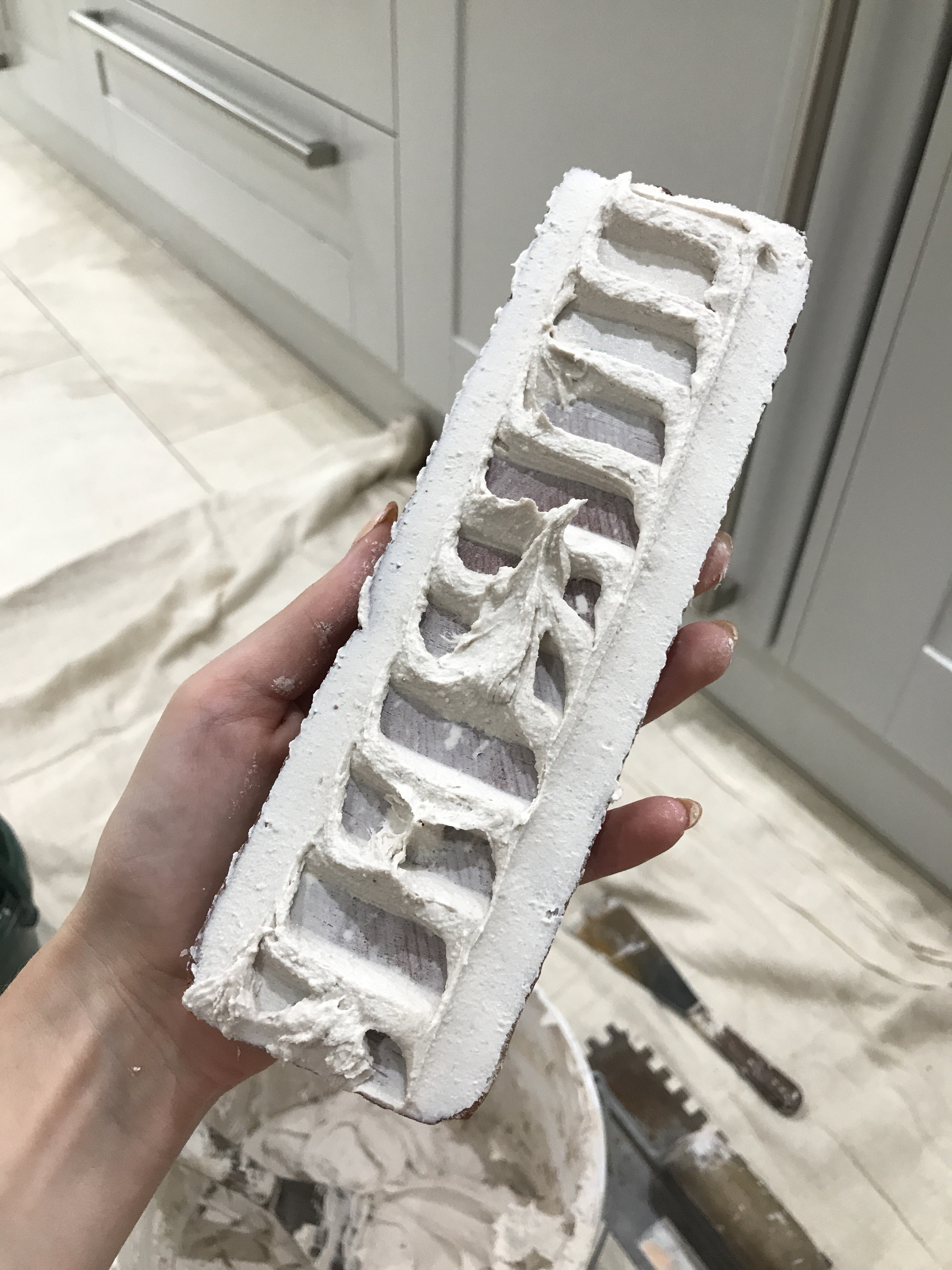 Then we were ready to start applying the brick slips.

We chose an extra hold adhesive to make sure the bricks were going to be 100% secure  on the walls. They weigh a lot more than regular tiles and so it was really important that we chose a suitable adhesive.

I applied the adhesive to the tile quite roughly and then used a wide toothed open handle steel trowel to create the suction you need underneath. I then looked at where the brick slip would be placed and used my finger to remove any excess adhesive that might be near to the units or a cabinet. 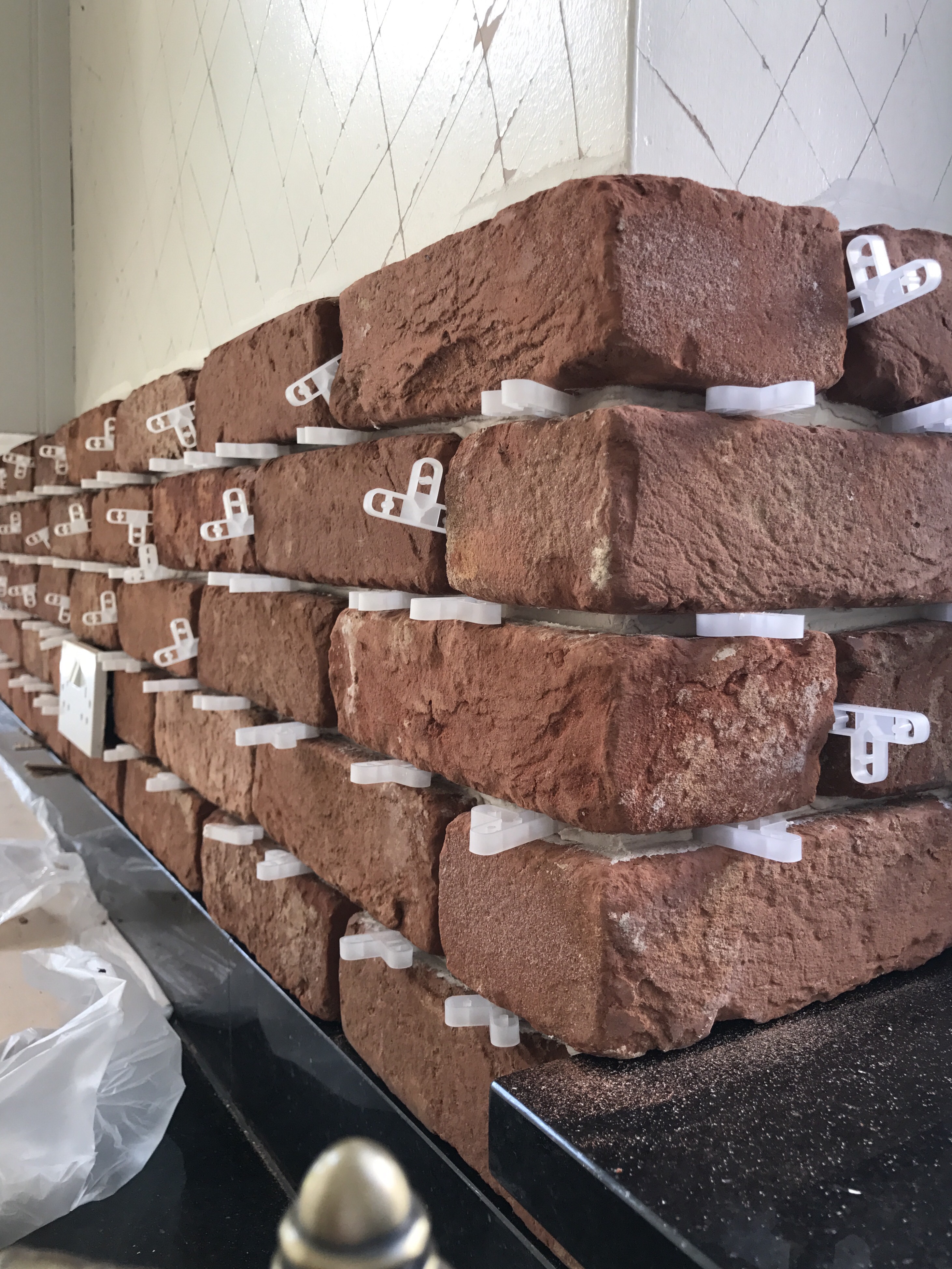 The corners were actually really easy to apply, with the same method as the bricks, and before we knew it we had a whole section on the wall! If you alternate the corners, you end up with a really realistic effect, as you can see above.

We ordered 10mm spacers especially, as normal spacers would have been way too small to allow for pointing later on, and I also kept a level with me 100% of the time to make sure the each brick was level itself, as well as level to the adjacent brick. This took some time but made sure the finished effect was more professional.

We also had quite a few plug sockets and edges that needed to be cut around, and for this we used a regular tile cutter. Luckily we had one from my dad, but you can hire these quite easily from hardware stores. After every cut, we dusted down the brick and ran a damp cloth over it to make sure that we still had a clean surface to apply the adhesive, allowing it to dry out completely. 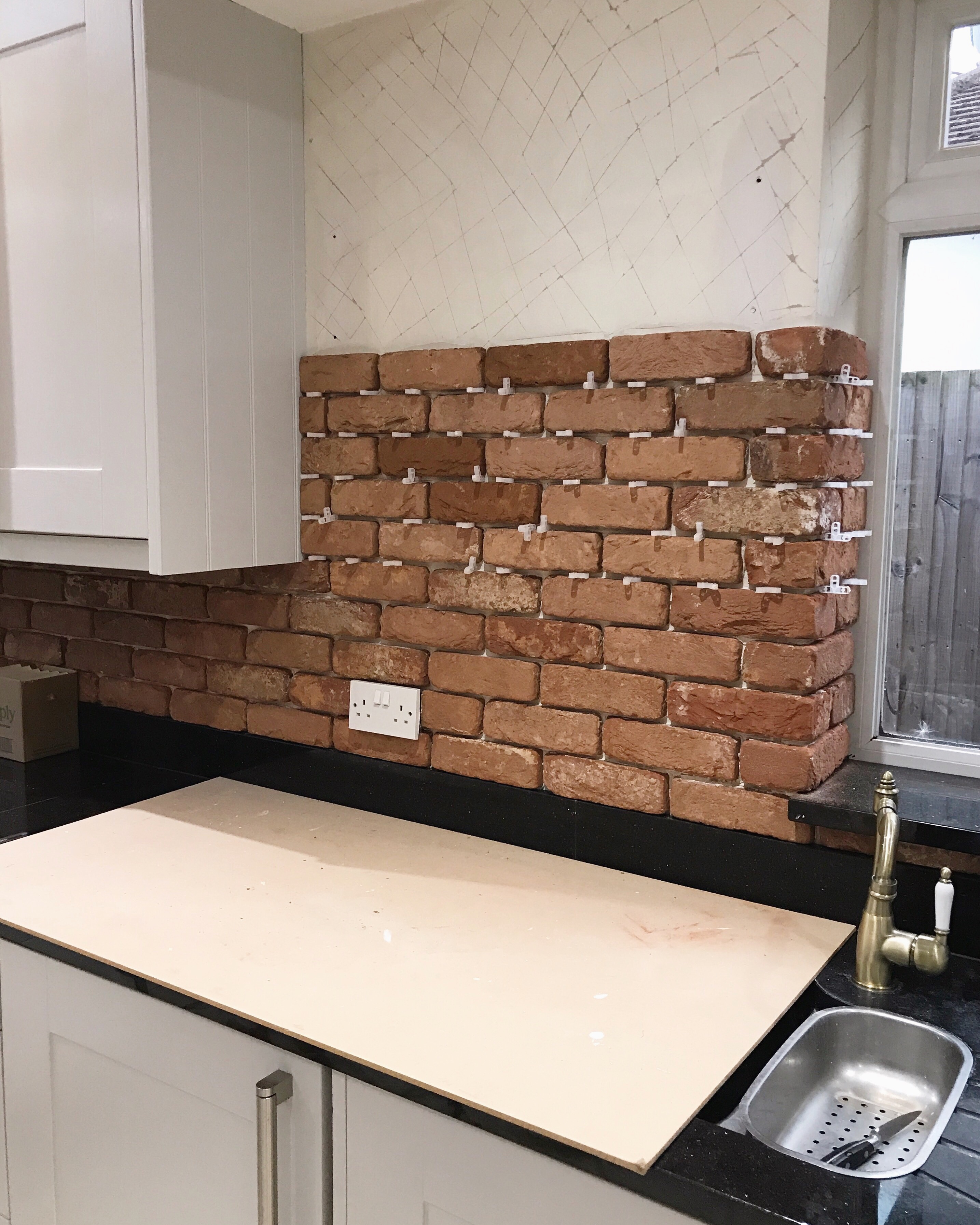 Due to the weight of the bricks on top of each other, we only ever went 5 bricks high before waiting a full 48hrs for them to fully set in place. This was a really long winded way of applying them but for novices like us, we felt a lot more confident knowing we were always working off of a solid base. It also meant that we kept a straight levelled line of the bricks without any movement. 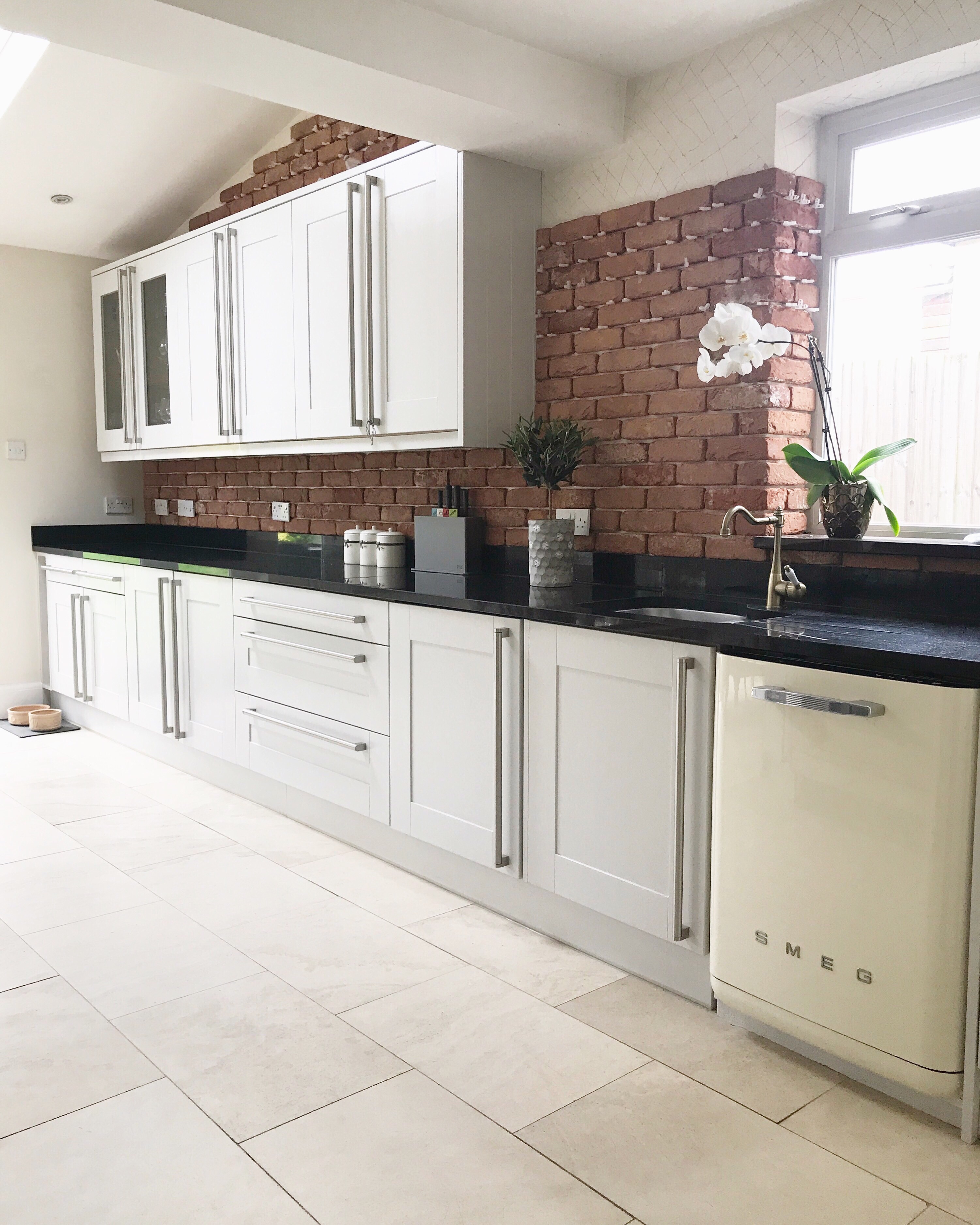 It wasn’t long before we had finished the first stage of the wall completely, and it was fully set in place with all spacers removed. I loved it already! But we just couldn’t decide on a mortar colour at all. For days we went back and forth between colours and decided to use a proper mortar so that we kept the authenticity of the wall, and I am so glad we did! 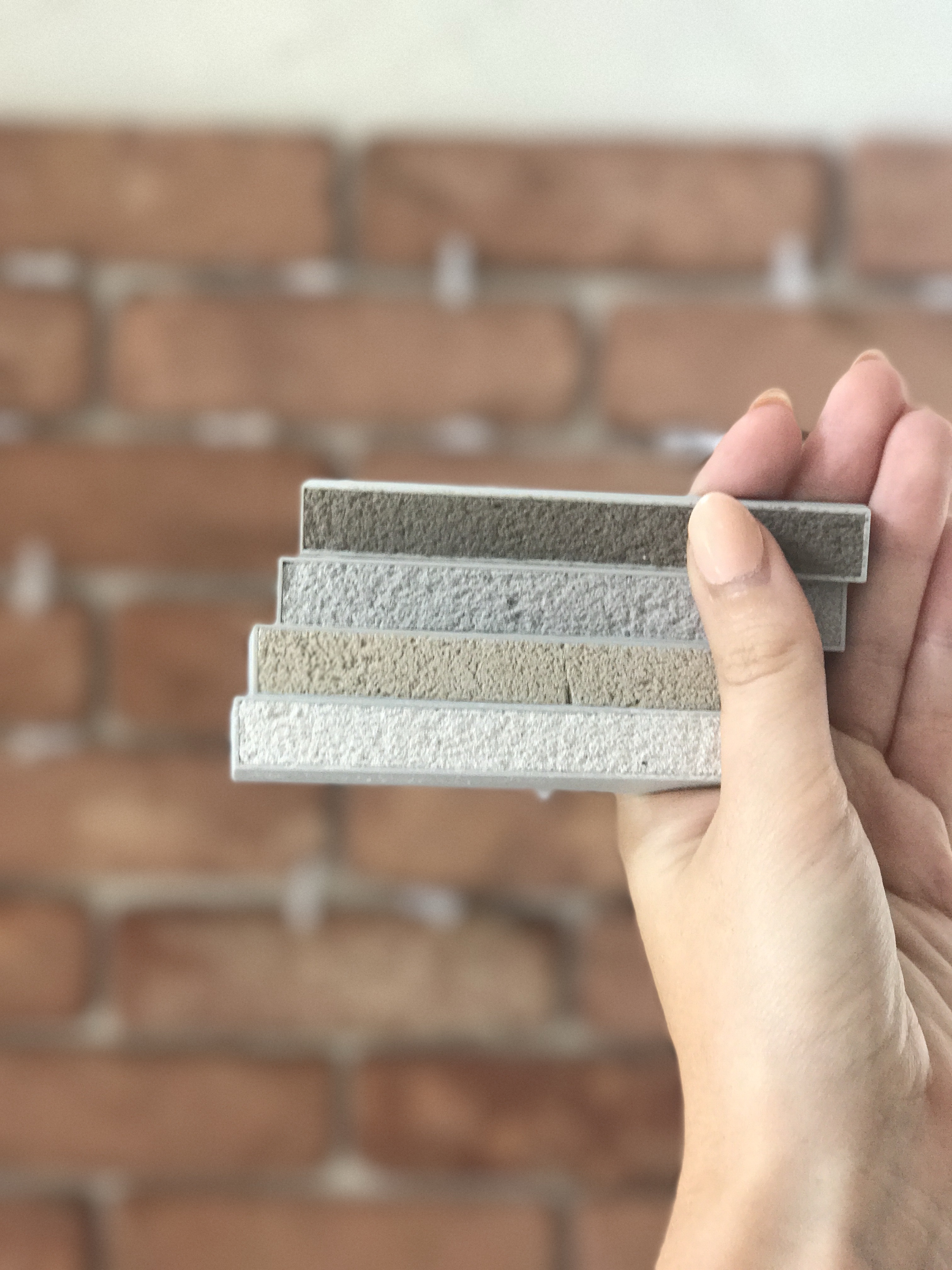 We eventually chose a stone coloured mortar colour as we felt that this looked the most natural.

Using a mortar gun that we bought from a local hardware store, we mixed the mortar with water to get it to a toothpaste consistency and filled the tube to the brim. This was then applied directly in between every brick quite roughly initially as it was drying quicker than we realised. I then went over it with a pointer jointer to push it into the gap more and create a smoother finish. Being the neat freak that I am, I then went over the pointing again with a piece of kitchen roll to make a really smooth channel. 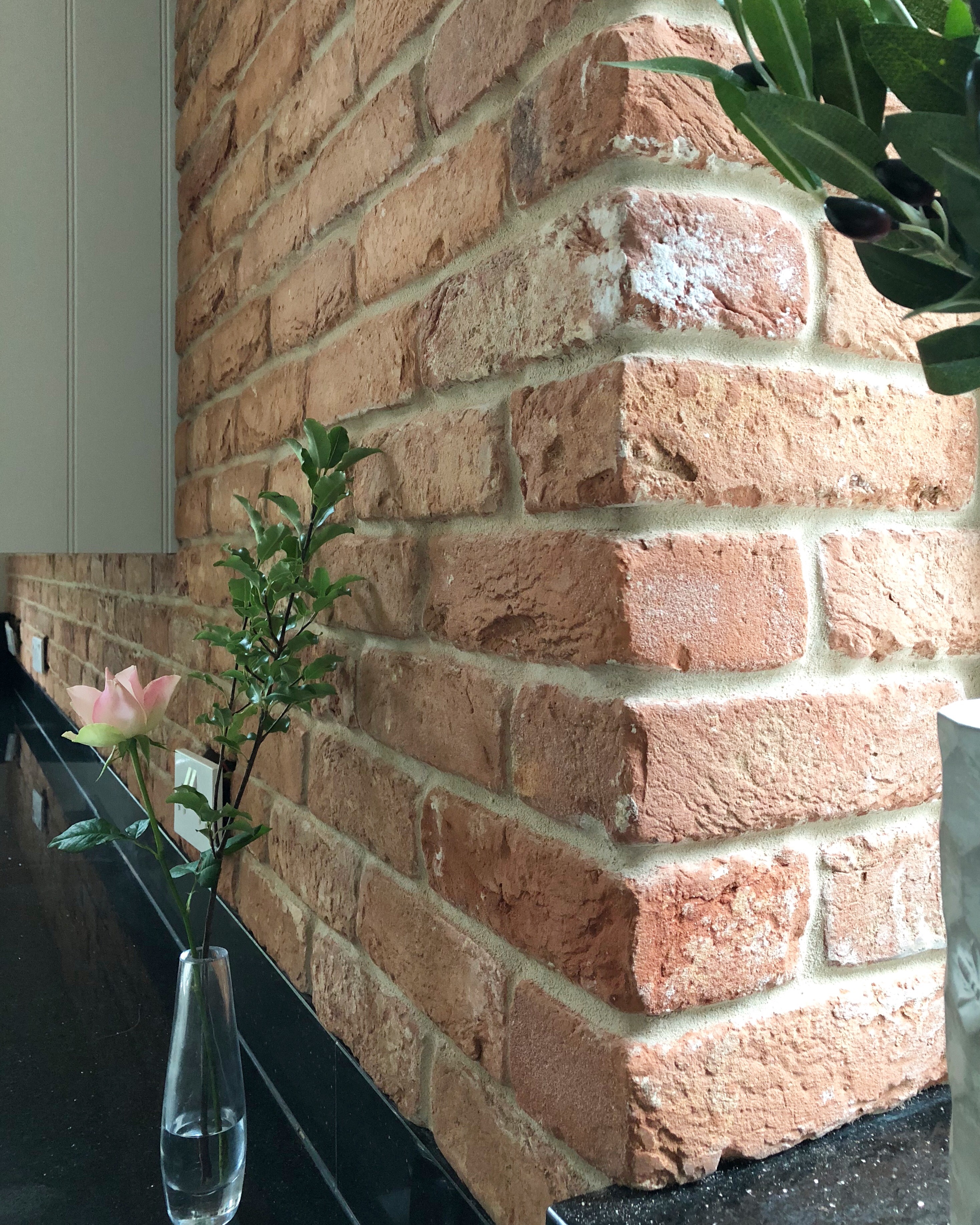 We wanted to make sure that we kept the shape of the brick visible, as they were so gorgeous and individual in shape, so we kept our mortar indented. However there are many ways of doing this depending on the overall effect that you are looking for. I used a wire brush to remove any mortar excess from the brick to kept it neat and tidy. This did take a while, but I am so pleased that we took our time with this final stage as the overall effect looks more professional. 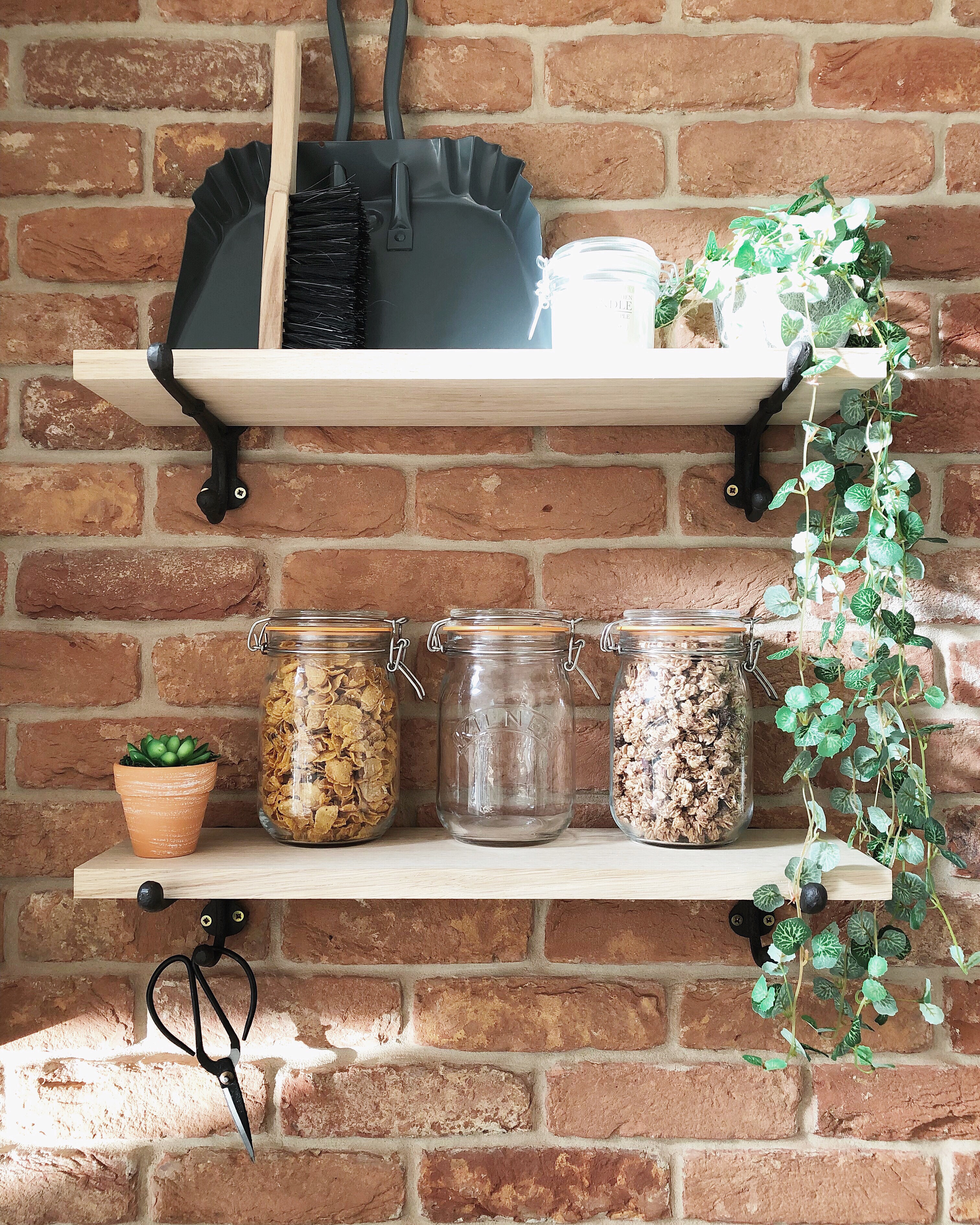 The finishing touches were so important to me.

I had chosen rustic iron and oak shelves about 6 months previously, and had an idea of the plants and jars I wanted to add. This is after all, our functioning kitchen, so I wanted to make sure I had the shelves look and act as they should, not just for design purposes, and I loved styling it with pieces bought from small business. The plants I chose added a softness against the brick and surfaces, and I made sure that our work surfaces weren’t too over cluttered as this would have looked far too busy against the brick finish. 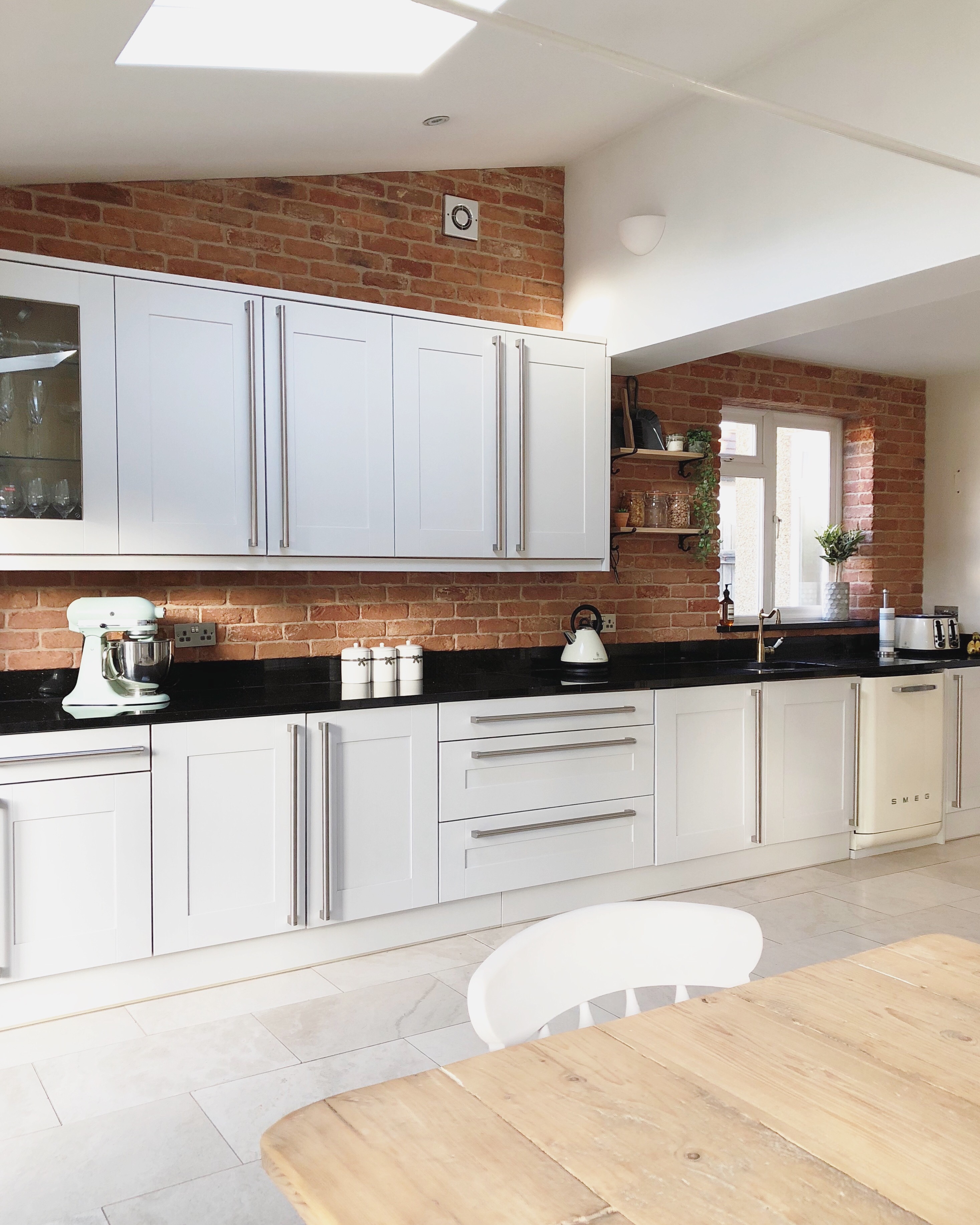 And that was it!

It took us about 6 weeks overall for the exposed brick wall to be completed, but only because we both work a full week and could only do more at weekends: I am so proud. I love coming down to the kitchen everyday and seeing a space that looks and feels like ours; completely different from the one we first moved into. Everyone that has visited since, has said that it just looks like it has always been there; like the original brick work of the building. That is the biggest compliment I could have hoped for.

We are no experts in tiling or brick laying (neither of us have ever tried this before) but we have both learnt so many new skills, and feel so much more confident in completing the other rooms in our home.