In amongst the larger, dustier, turn-your-life-upside-down renovations, it’s nice to have a smaller project to work on with more immediate success – mainly for my own sanity (before I am once again consumed with the familiar renovation fear of never EVER being finished!)

This is exactly what we did with our oven, whilst the kitchen was still a mountain of bricks, dust, and mortar colour samples!!

I love how smaller projects (similar to my previous fireplace update) completely transform and finish an area, and yet really only require a couple of small changes!

We inherited this beautiful beast from the previous owners when we moved in (probably because they couldn’t actually move it out – it weighs a ton!!) and we absolutely love it! In our open plan kitchen, it has its own area to itself, with its own cupboards and work surfaces, and was exactly what I dreamed about having when we were planning our ideal kitchen!

The only problem was, it was completely unloved, looked like it hadn’t been cleaned since they bought it, and the stainless steel was tarnished to the point that no method spray was going to revive it (I tried!!!).

After we finished paining the kitchen units, the new grey colour really brightened up the space around the oven, but there was no denying it constantly looked dirty no matter how much I cleaned, thanks to the awful stainless steel splashback. It’s one of the first things you see when you enter the kitchen, and is such a large area you can’t help but notice how unloved it was. 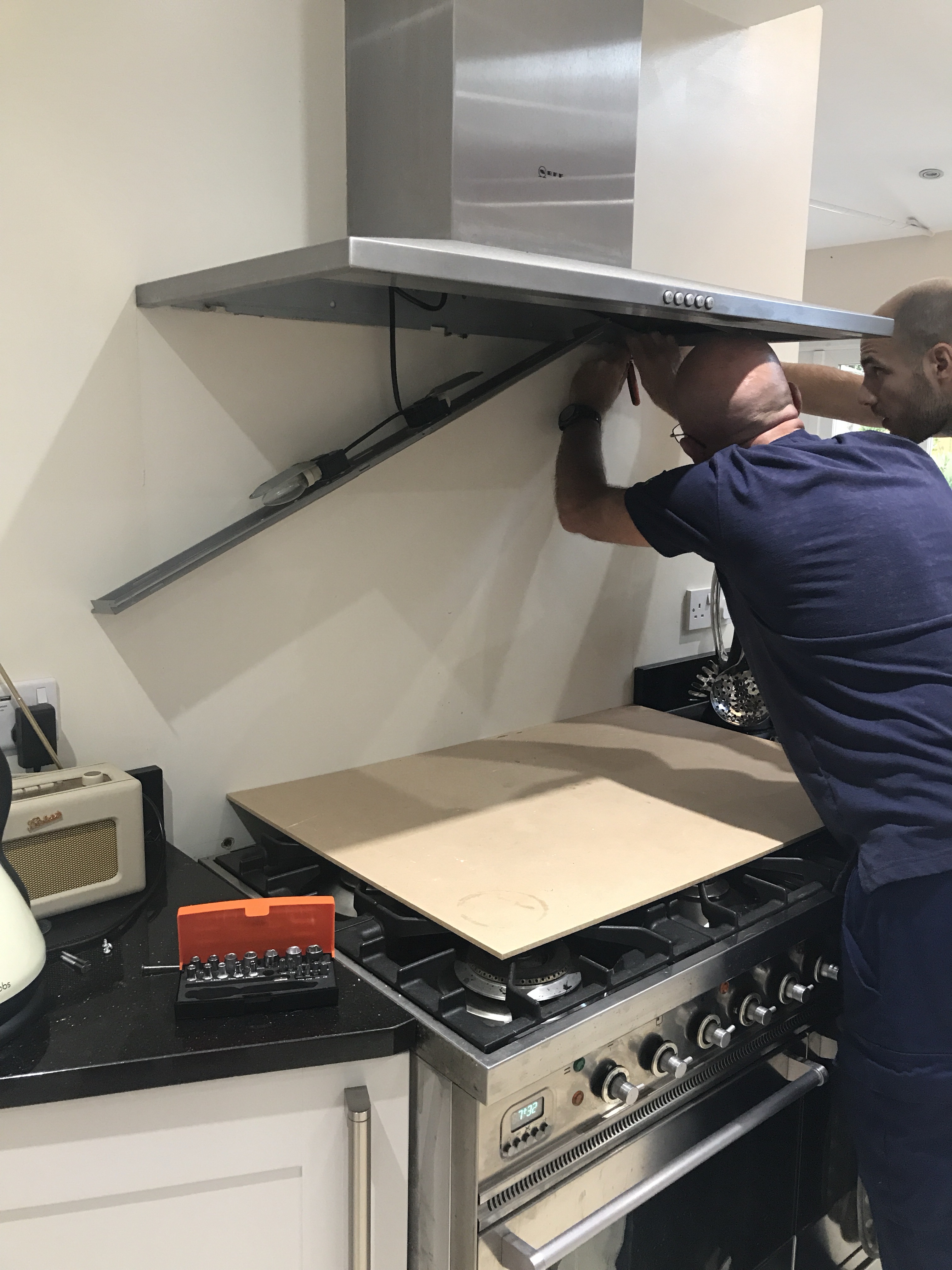 So we decided it had to go!

We had no idea how it was attached to the wall, and had visions of the plaster coming off with it, so we asked my dad for his help.

Once the oven was away from the wall, and we could see the bottom of the panel clearly, it became clear that we were going to have to get behind the extractor hood. It didn’t take too long for the three of us to disassemble the fans and lights and panels from the extractor, and soon realised the splashback was only screwed to the wall (hooray!). 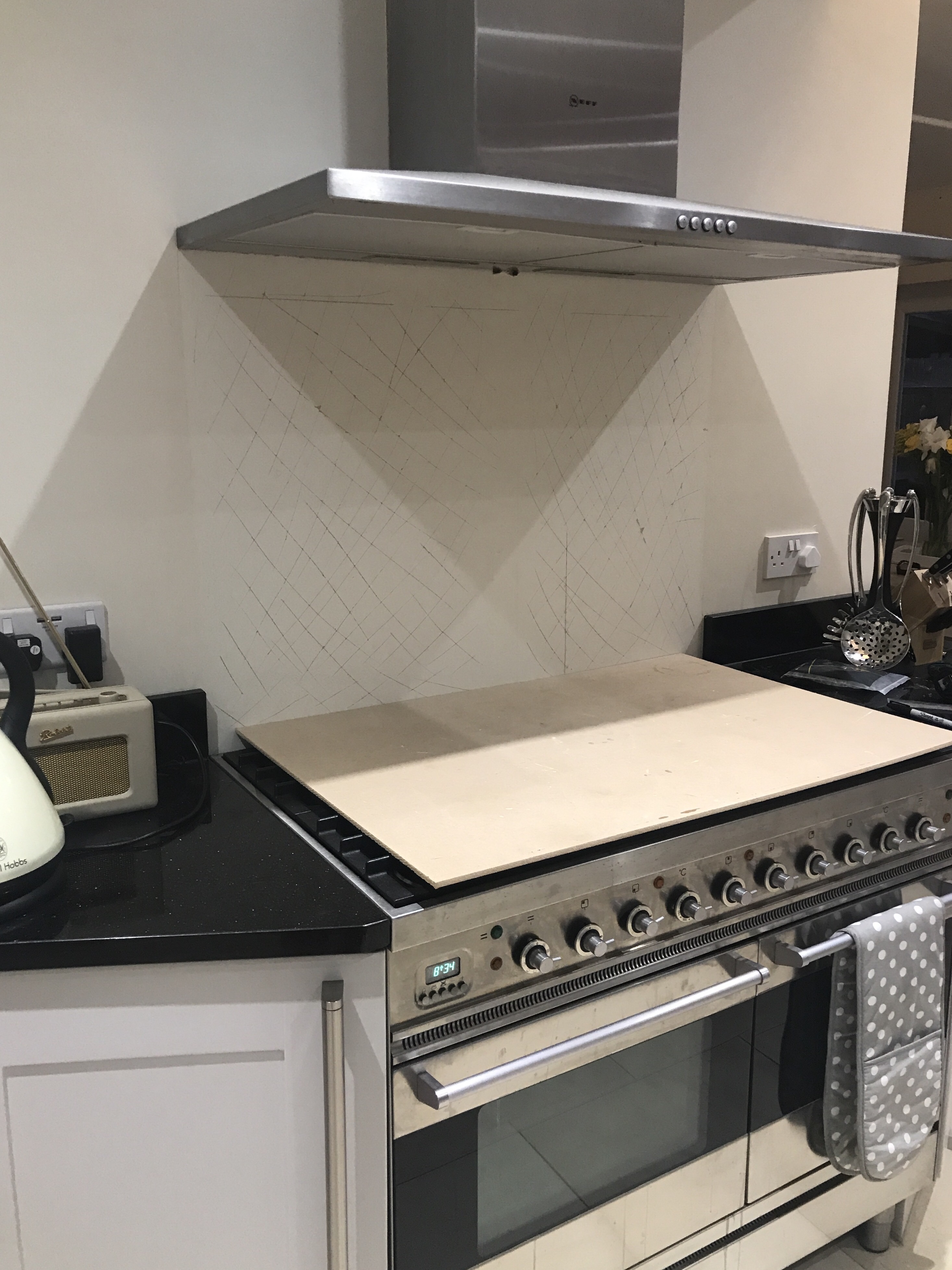 Yes, it was ridiculously fiddly, and we nearly pulled the extractor hood off the wall from trying to get behind it to unscrew the splashback, but eventually it came lose and we were left with a lovely bare wall – no more hideous stains!!

It already looked a million times better than it did before, and I was so relieved the wall was still intact! All we needed to do now was score the wall ready for filing. Luckily MrB and I had been browsing grey tiles for a while, and found some beautiful large Moroccan ones that would create the statement that we wanted.

Who says floor tiles can’t go on the wall?

The tiles are 330x330mm, and luckily our oven is 1000mm wide so we knew that by choosing this particular pattern, we could get three full tiles across, which gave it a really balanced finish.

Unfortunately we weren’t as lucky on the measurements up to the extractor but it was only a small cut needed and the pattern works really well.

We decided that we needed a trim to smarten up the edges of the tiles that would be visible at all times, so chose a brushed chrome finish. These little touches make such a difference to the overall effect, and are such an easy addition.

Annoyingly we didn’t have a solid footing to tile from (the tiles started half way up the wall) and the weight of them meant that they kept slipping down, so we had to come up with a solution to keep them in place. Having my dad around for these situations is a must, what a life saver! He quickly nailed a piece of wood to the wall and voila! Problem solved.

We used 3mm spacers, and all in all the timing took only a couple of hours to complete.

After all the tiles were in place, we decided to get the oven professionally cleaned as it was covered in dirt and grease from probably 12 years of not being cleaned by the previous owners. We wanted it to feel like a new oven to us, and we couldn’t be happier! Both inside and out it looks and feels like a brand new oven (I don’t think it’s ever been so clean!). Finally I can keep on top of cleaning it, as opposed to trying to get it back to how it was. 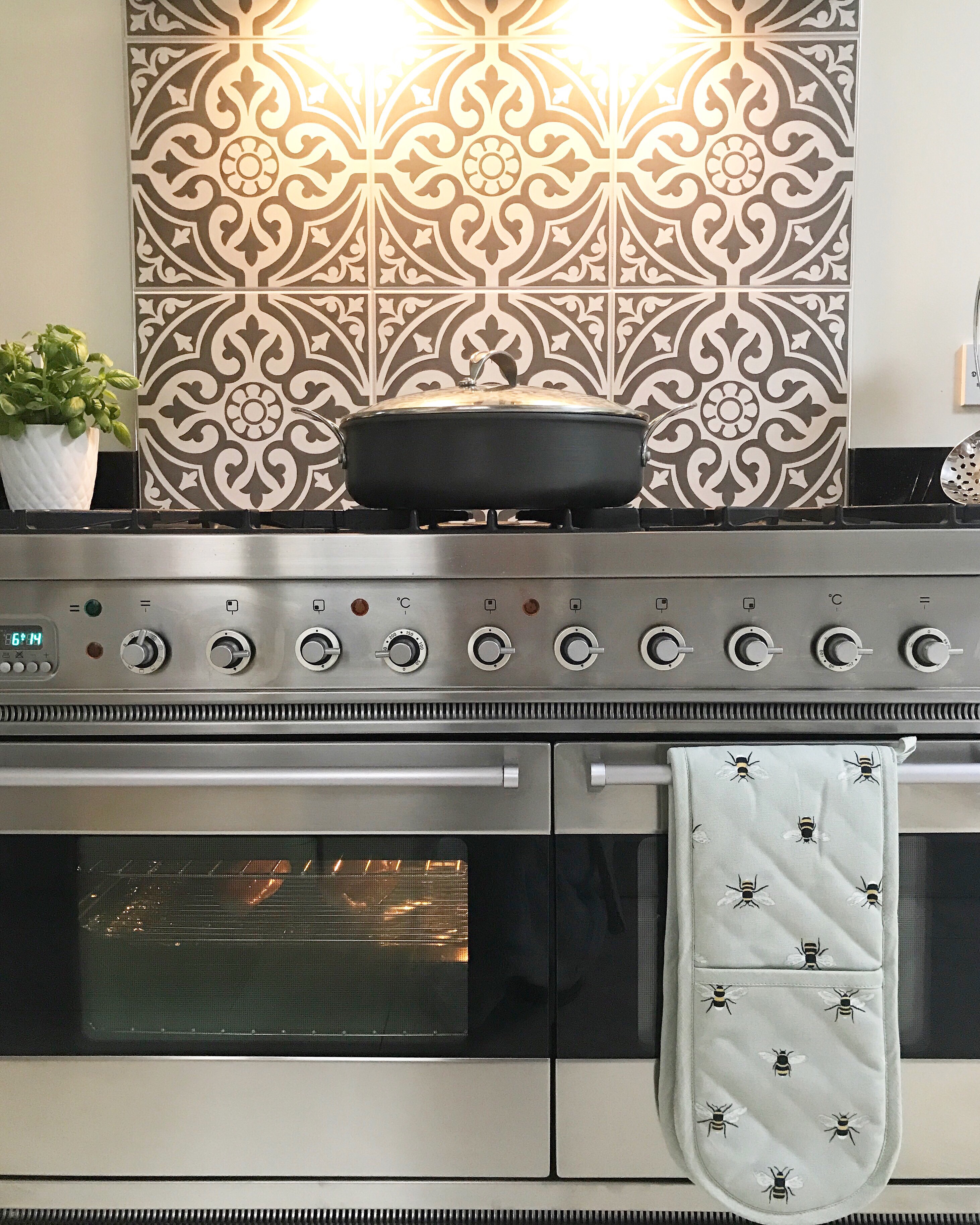 It wasn’t the most difficult, or the most expensive renovation project, but this small transformation has completely changed the look and feel of the kitchen. The simple addition of the tiles instead of the ironically stained stainless steel, has given this space it’s own purpose and identity and I absolutely love it.

Yes the kitchen is still covered in dust, we still have our appliances living on the dining room floor, and is still far from being finished (don’t get me started on the other 80% of the house), but my sanity has been restored (for a short while at least) knowing that another project has been ticked off the list.

You may also enjoy: